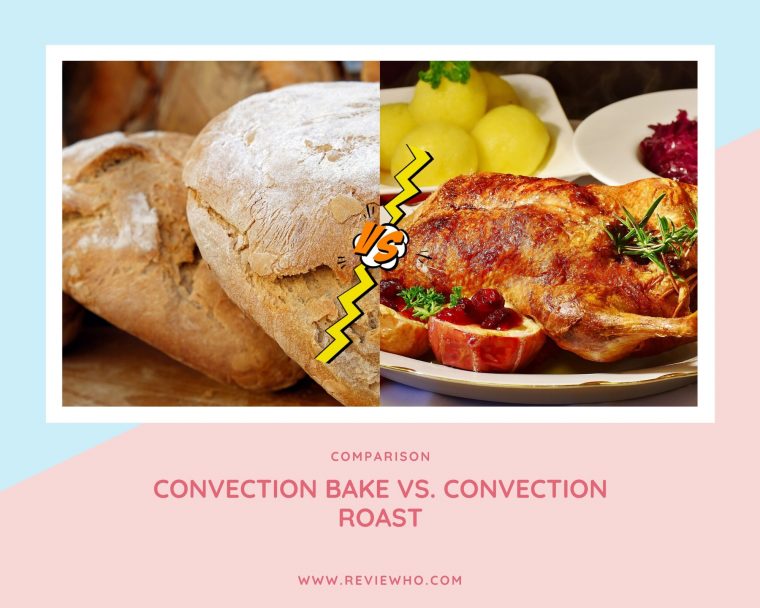 If you are lucky enough to have a convection oven at home, it is possible to enjoy a variety of recipes every day. convection ovens have many amazing features as compared to traditional conventional ovens. These modern appliances work at lower temperatures and ensure even heating of food items placed inside.

People love these ovens more due to their ability to provide baking and roasting features in one machine.

However, most people are not aware of the difference between these two cooking methods.

Although it is easier to make the adjustment between both settings, one should get some clear idea about how they differ and which one you should prefer for preparing a variety of recipes.

There are two main processes that can happen inside a convection oven; it is baking and roasting. Both these processes are followed to prepare a variety of recipes, but what is the main difference between them.

In general terms, both these words describe cooking with hot, dry air that is generated inside the oven while keeping temperature somewhere around 300 F.

The convection oven has the arrangement to circulate that dry air in the entire space that further leads to the browning reaction of the food.

In this process, the browning achieved after heating up carbohydrates such as a loaf of bread, results due to caramelization effect; whereas, the browning of meat products happens just because of the Maillard reaction.

Baking and roasting both processes are executed while keeping food uncovered so that the food is prepared due to the reaction of hot air, not the steam.

As this process makes use of indirect heat, it naturally results in even heating. The process is pretty different from normal pan-frying, where a substance that touches the base of the pan becomes hotter as compared to the food on the upper side.

The simple definitions for both these popular forms of convection oven cooking methods are given below:

In this case, hot air moves fast, leading to the crispy outer layer on the food that seals all the juices inside.

One can also apply the roasting process to the vegetables where hot air tries to caramelize the sugar present inside vegetables.

Hence, the central part of the vegetables stays soft, and the outer layer becomes crispy.

Convection ovens are highly proficient in preparing recipes with cakes, bread, and cookies.

Butter helps to produce rapid steam inside the convection oven so that cookies and pastries can become flakier while rising higher as compared to the traditional oven.

When we talk about the regular oven, the fast rise in the pastry may cause it to fall because the outer layers do not find enough time to settle for this baked treat.

But when such delicious items are prepared in the convection oven, the outer layers settle down fast and they help the pastry to maintain the entire structure without falling down.

Although convection bake vs roast cooking methods is much identical, few simple things describe the difference between them. A list of few important points is given below:

This is the most important factor that specifies the difference between both these cooking methods. In the roasting process, food achieves a solid structure before starting the main cooking process.

However, in the case of baking, the food has a loose structure in the beginning, and it becomes solid as the cooking process completes. The first case is suitable for vegetables and meat, whereas, in the second case, we talk about muffins, cakes, and bread.

The temperature settings followed for both these methods are also different. In the case of roasting, the oven is kept on the higher temperature, somewhere around 400-degree F to achieve browning.

It provides a flavored crust to the outer layer of the food. On the other side, the baking task is completed at a slightly lower temperature, around 375 degrees F.

Note that baked goods contain lots of fat inside, whereas the roasted food contains fat only on the outer layer. In most cases, roasting is done in the uncovered open pan, whereas for baking, the food is covered.

Many people use roasting and baking terms interchangeably, but they have many unique aspects.

In the case of roasting, we apply more heat to achieve browning faster than baking. The term roasting is mainly applicable to foods like vegetables, poultry, and meats; whereas, baking is applied to seafood, cakes, fish, and many more.

Some of the most commonly prepared food items in this category are rib boasts, beef tenderloins, and loins of pork. Some people also prefer to roast whole poultry, but this task seems a little difficult as the process of roasting leg meat is different than roasting breast meat.

Roasting can also be achieved at lower temperatures, between 200 to 300 F by keeping food in the convection oven for a longer duration of time. But in this case, you have to sacrifice the surface browning while maintaining much flavor; however, the high-temperature roasting leads to drier food.

Baking can be used for steaks, fillets, and even whole fish. In this case, the vegetables and other fillings are placed inside the body cavity, and then the structure is baked so that flesh cannot dry during cooking.

Some people also love to brush the fish with melted butter or oil before starting baking. As the food stays liquid during the baking process, the layers do not dry out fast.

Here Are Few Hand-Picked Articles For You To Read Next: