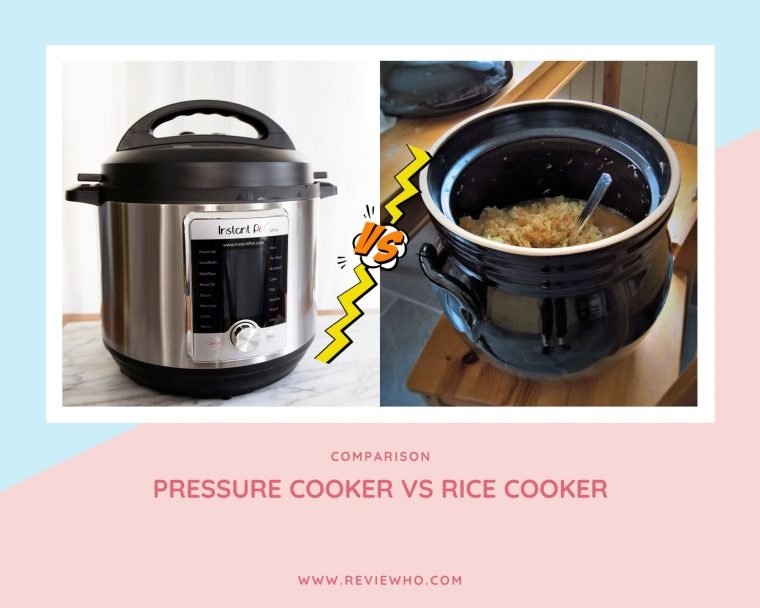 Cooking is a section, which requires much attention when we use different types of cooking appliances. The selection of good appliances not just reduces our much care but also makes the cooking easier depending on which appliances are selecting for our kitchen.
There are many types of appliances for common home and restaurant. Here we will keep our talking only around the kitchenware, which is used at home kitchens. Even in such appliances, we will stick the topic rice cooker vs pressure cooker.

In this article, we will also discuss which one will suit whom and which one you should go for, rice cooker or pressure cooker. So without wasting any single moment, let us start the topic.

In a rice cooker, there are two layers of the cooking segment, the outer one, and the inner one. The inside of the outer layer has a heating pad or heating rod.  The purpose of this layer is to transfer the heat to every part of the cooktop evenly. The inner layer holds the food to be cooked.

In the case of a pressure cooker, you will not find any such separate layer to specially provide the heat.

The basic parts of the pressure cooker include the cooking pot to keep the raw food, a lid to cover the pot, and increase the pressure inside the pot, rubber ring to make sure no hot sir escape out. And a valve to let go of the extra gas created inside the cooker. and the heat is provided by the outer source like a gas stove or induction or cooktop or electricity.

Both the cookers have more than one uses. It makes them both worth buying. However, if you want to select any one of them, a pressure cooker beats a rice cooker. It can do more kitchen tasks as compared to the rice cooker.

Pressure cookers alone can do a number of tasks like cooking rice, boiling potatoes, making curry, etc. If you go to buy appliances for each of these tasks, a lot of space will be needed to keep them. So it is very clear that a pressure cooker helps in saving space as well as money.

If we talk about the multi-tasking of these cookers, both the cookers show some distinctive features. In rice cookers, apart from the rice, you can cook some more kinds of vegetables, soups, eggs, etc. However, this cooking will too need some more time than pressure cookers.

In pressure cookers, there are many more numbers and types of cooking you can do. Apart from the formerly mentioned cooking items, you can also cook here many other different types of vegetables, non-veg foods. These foods can be prepared much more effectively than those of rice cookers.

Timesaving in getting your food cooked

Time is taken by different types of foods prepared in every kitchenware according to the type of food you cook and the amount of heat you provide. However, it also greatly depends on the type of cooking appliances you choose to cook them.

In the case of a rice cooker, the amount of heat level inside the cooker is only up to the boiling point and even there is no pressure. This condition lets it take more time to cook the same food which pressure cooker can cook in less amount of time.

Whatever you purchase, you never miss to look at the price of the deal and if it is out of your budget, you have to leave it sometimes, even when the deal attracts you the most. In the case of a pressure cooker, you will not find any such issue. It is all amazing features you can use and enjoy with a minimum starting price when comparing with rice cookers.

Even some pressure cooker gives good completion to rice cooker in terms of price but mostly you will get them at a lower price than the price of the rice cooker, which makes it more amazing.

The above-mentioned points should have been very useful in deciding which cooker you should go for. In most of the cases, we found that pressure cooker is much better than the rice cooker, but since rice cooker exists and people like to use that, too it means there are many things, which are better in rice cookers, or some time only in a rice cooker.

Now we will get to know some points where the rice cooker clearly beats the pressure .so let us know of those points.

The texture of the rice

It is a very good idea to get your food cooked even without continuous observation and from time to time stirring. In a rice cooker, these all things you will find no longer a heck.

This is equipped with the system, which automatically turns off the cooker when the rice is cooked completely with good texture flavor or remained in that.

This feature is also considered the main USP of this cooker, which makes it stand out from others.

Nowadays you will find a suitable design in almost every field. People want most things in an artistic way. As you notice above too that even the food presented in an artistic way incite more the appetite. Therefore, if you too are concerned about the feeling of the cooktop and decor of your kitchen, you may go for a rice cooker.

Even though the pressure cooker does not look bad at all and mix with every kitchen very well but the rice cooker gives a modern look to the kitchen.

Day by day people choosing and creating a way to get more comfort and ease.  If you will go in-depth, you will find every invention was done to make your life easier.

A Rice cooker is an example of it. As we discussed above, it does not require continuous observation and once you set it to get your rice cooked, it will shut down automatically after the rice is cooked without your other steps.

Though the pressure cooker cooks fast, it is sometimes very dangerous to handle it. As we know that it creates a lot of pressure and heat inside, it may not be recommended to use it without any prior experience of cooking in a pressure cooker. In a rice cooker, you will not find any problems like this.

It does not produce that much heat and even does not work on the principle of pressure anymore. Therefore, it comes to be very handy in comparison to the pressure cooker.

In this way, you can plan good cooking in advance.

Should You Buy a Dedicated Rice Cooker or a Multi-Function Pressure Cooker?

So far, we have discussed some of the amazing features of pressure cookers and rice cookers. We found that both of them have some good qualities and some bad. Here we got some good and some bad points in both of the cookers. None of them is less than each other.

However, you should buy the cooker which fulfills your requirements. It may either be a rice cooker or a pressure cooker, whichever you may choose for your kitchen.