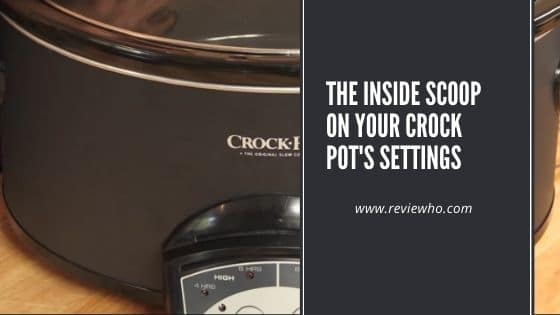 Do you have a crockpot in your kitchen? If you do not, have you used one before? Well, if you have used one, you understand the main advantages associated with cooking using a crockpot. In addition to giving you great meals, a crockpot will lock in all the important nutrients of a meal so that you enjoy the meal and get the best nutrients.

On the other hand, if you are using the lowest temperature, then it will take around four hours. That temperature will remain constant until your preferred cooking time is up.

In this article, we will discuss everything you need to know about a slow cooker temperature. We will include a crock-pot high vs. low comparison. Stay tuned!

Is it Best to Cook on High or Low?

The main difference you will realize between the low and high-temperature setting is the amount of time it will take the slow cooker to reach the simmering point. When you have it on the highest setting, it will take four hours, while it will take around eight hours when you are on the low setting.

It is understandable if you would think that cooking for a shorter time would be best. It will make your meals in a shorter period. However, it is important to remember that if you cook your meals for longer in your crock pot, then more flavors will be preserved. Therefore, it would be better to cook for longer at a lower temperature.

Note: The best thing to do to achieve the best of your meal is to follow the recipe properly. That means that you should avoid any shortcuts by any means. Do not cook at high temperatures when the recipe recommends you cook on a lower temperature setting.

With that in mind, you can increase the time it would take to cook in certain situations. For instance, if you want to leave the house for a certain reason, you can cook on a lower setting to cook for longer even if the recipe takes four or five hours.

What Temperature is Best for Slow Cooking?

Note: When doing this, you should be fast because around 10 degrees are lost once you open up the lid.

With that in mind, the highest temperature you measure should reach 285 or 290 degrees.

If you are checking the low-temperature setting, you should heat it for around eight hours, then make sure it reaches around 185 or 190 degrees on your thermometer.

Conversion of Low vs. High on a Crock Pot

This section helps discuss the conversion of a slow cooker temperature.

If you want to cook a meal on your crockpot on the lower setting, then the main idea is that it will take around two times the time it would take if you are using the high setting. With that being said, you should know that this is not always the case when you are converting the time when cooking on a crockpot.

For instance, a recipe might suggest that you cook for 12 hours when you are cooking on a lower setting, then suggest eight hours on a higher setting instead of six.

The following is a system that will help you to convert the time you would use depending on the crockpot temperature. It is a simple and quick method.

When you are using an oven at 350 degrees Fahrenheit, then six hours on low on a slow cooker would be equal to 30 minutes in an oven.

Yes. However, as you have read above, it does not mean that the conversion for all other hours should be divided by two.

Yes. A slow cooker will get hot enough to kill bacteria. The low heat on the crockpot, coupled with the steam in the container will destroy bacteria.

So, what temperature is high on a crock pot? We have described that the highest is around 300 degrees and we have also included some information to help you convert the different cooking temperatures. However, our main recommendation is following the recipe you are using.