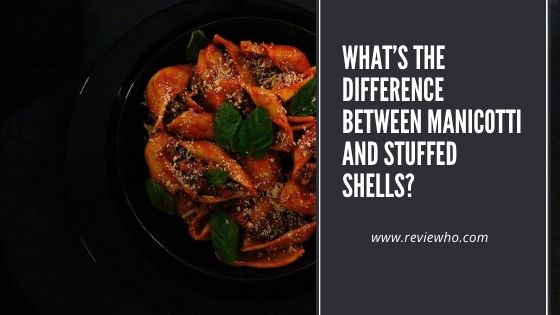 Some differences can be pointed out, as they are not identical products in origin, shape, usage, or serving.

Today I have clarified all the contracts between stuffed shells vs. manicotti.

The stuffed shells are a type of pasta that is authentic Italian. They originate from Naples and Genoa and have been spread worldwide in different ways and recipes.

According to my research, Manicotti does not have a long history in the region of Italy. Different sites state that it is an Italian-American type of pasta, as they are similar to cannelloni but not the same.

The significant difference between manicotti and stuffed shells is the shape of those pastas. Manicotti have tube shapes; they are tall and thin. They can be four to five-inch long.

The pieces of manicotti in a pack are countable, and usually, a package can have from six to ten selections. Their surface is smooth, and they keep their solid shape even after getting out of the oven.

On the other hand, stuffed shells are more minor; just like the name dictates, they have the shape of a shell. The surface is not smooth as it intends to imitate the shell most similarly.

Big brands like Barilla market them in three different sizes: medium, large and jumbo. In any case, a pack of this type of pasta has numerous shells.

Manicotti pasta, due to its shape, is used mainly for baking. Of course, you can try to boil them and consume them like that, but I cannot say you will succeed with an adorable recipe.

Manicotti are made to be filled and then baked in the oven. If they are medium or large, Shells can also be served in recipes that require only boiled pasta.

Children like the medium version as they can be easily consumed only with garlic or butter sauce.

The first rule of eating pasta: you never use anything else but a fork. If you go to Italy and consume, for example, spaghetti with a fork and roll them in a spoon, you are behaving against classic Italian rules.

This rule certainly has one expectation: that is the big type of pasta like manicotti or cannelloni. In this case, you will need both a fork and a knife.

In the case of stuffed shells, you can consume them only with a fork or spoon.

No, and I don’t recommend it. There are a lot of recipes that call for cooking the pasta before stuffing them, but I personally find that unnecessary.

*It’s important to read the directions on your packaging carefully or check with the manufacturer if you have any questions about cooking times and temperatures for manicotti shells.

Uncooked manicotti should be stored in the refrigerator and used within 2–4 days after the “sell-by date” if it has been properly stored.

After being frozen and thawed, uncooked manicotti will generally keep for about 3 to 4 days in the refrigerator.

Cannelloni does not need to be boiled before it is cooked. The pasta will soften during the baking process and cook through. The cannelloni can be boiled if you want to add more flavor to your dish, but that’s entirely optional.

If you’re using store-bought cannelloni, you may want to boil it briefly before baking. This will ensure that the pasta cooks all the way through without getting mushy on the outside while still keeping its shape.

Some people prefer not to boil cannelloni because they fear it will fall apart when they bake it. However, if you use fresh homemade pasta dough, which is sturdy enough to hold up during cooking, you shouldn’t have any problems with this technique.

How long does manicotti last? How can you tell if manicotti is bad or spoiled? The shelf life of manicotti depends on a variety of factors, such as the best by date, the preparation method, and how well the product has been stored. To determine whether it is still safe to consume, there are several simple guidelines you can follow.

Generally, it’s best to discard food that shows signs of spoilage. Some general guidelines include:

If a package of manicotti has an off odor and flavor, do not eat it.

If there are any mold spots on the surface of the manicotti, throw them out immediately.

If you see any discoloration in the manicotti, discard it immediately.

The stuffed shells are a type of pasta that is authentic Italian.

Leftover manicotti is good for 3 to 5 days in the refrigerator.

Leftover manicotti can be frozen for up to 6 months.

As you can see from this article, the differences between manicotti vs. stuffed shells are not very big.

Any of the differences shown does not affect the recipes, as you can use the same sauces or filling and enjoy the results as delicious.

I prefer to consume both and use them as an interchange of each other in my meals if I cannot find one of the types.