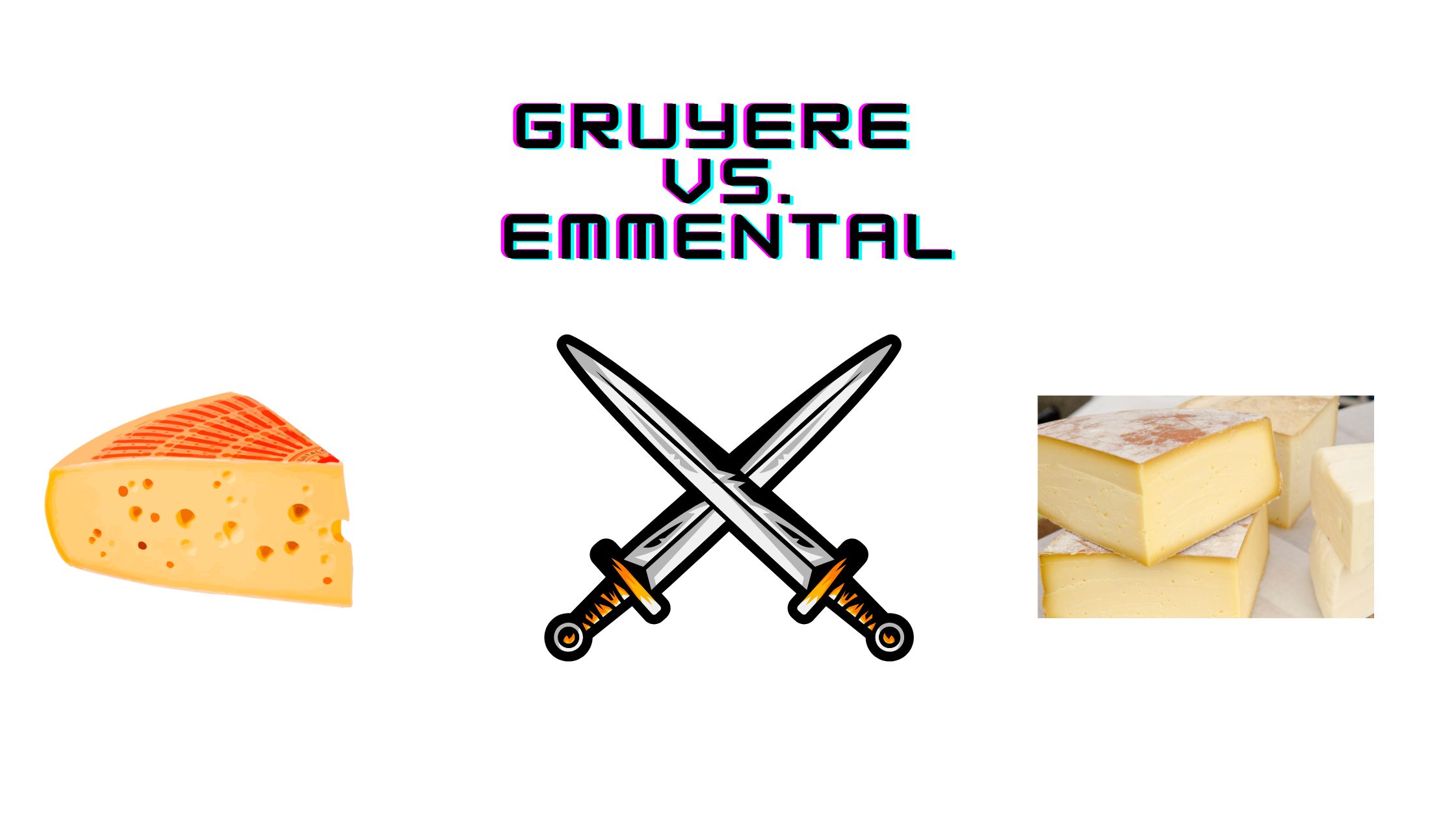 For a long time, cheese has been part of the Swiss diet. Since the 13th and 14th centuries, cheese has been a standard food. Even though the earlier types of cheese were simply made using soured milk, much has changed.

As cheese-making industries developed, newer forms of cheese have been introduced into the market. Today, there is a wide range of cheese, which includes Gruyere and Emmental. Do you know the difference between the two?

This post describes the Gruyere vs. Emmental difference. By the end of it, you should be able to tell just how different they are. Let’s get started.

Let’s start with an overview of each of these two, starting with Emmental.

Emmental is semi-hard and is made using cow’s milk that is partially skimmed. It is from Switzerland. You can differentiate it from the others because it has holes the size of walnuts. This is among the oldest t types of cheese from Switzerland.

You can choose from three main variations. Their difference is the aging time. The classic type takes around four months to mature. The reserved type takes eight months, while the premier cru will take approximately 14 months.

Gruyere is a hard cheese from cow milk. It is identified by its creamy, rich, nutty, and salty flavor. It is a great choice for baking because its flavor does not overpower. Additionally, it works well for dips and fondues since it melts well.

Let’s dive deeper into the difference.

One of the main differences is their appearance. They have a similar pale yellow color, but Emmental features huge holes that are produced by gas pockets in the fermentation process that will take up to six months.

Gruyere has smaller, fewer holes compared to Emmental. These holes can become very small depending on the aging process.

These cheeses have a similar origin and can be stored at almost the same time in a refrigerator. However, the taste is different. Gruyere has a saltier flavor compared to Emmental. It is also more powerful in flavor.

Even though from different regions, they are both from Switzerland. They have melting properties that are almost similar. Even so, gruyere is preferred more for creamier fondue.

These are both nutritious types of cheese. They contain potassium, magnesium, proteins, and different types of vitamins. However, Emmental has lower calories.

It can be hard to decide which one is best for you. The choice would solely be based on what you prefer, the time you have on your hands, and the market around you.

Why is Gruyère so expensive?

Gruyère is a type of Swiss cheese that is prized for its rich, nutty flavor. One of the reasons why Gruyère is so expensive is that it takes a long time to make. The cheese is made using raw milk from cows that graze on grasses in the Alpine meadows. The milk is then slowly heated and mixed with rennet, before being left to form into curds. Once the curds have formed, they are cut into small pieces and placed in cheesecloth bags. The bags are then pressed to extract excess whey, and the curds are placed in brine to salt them.
After several weeks of aging, the cheese is ready to be eaten. Because of the lengthy and labor-intensive process involved in making Gruyère, it is not surprising that the cheese carries a high price tag. However, many cheese lovers believe that the flavor of Gruyère more than justifies its cost.

Why does Emmental cheese have holes?

The holes in Emmental cheese are actually a sign of quality. In order for the cheese to develop holes, it must be made with raw milk and aged for at least three months. During this time, the cheese is constantly turned and brushed, which helps to encourage the growth of bacteria.
These bacteria produce carbon dioxide, which gets trapped in the pockets of curd that form in the cheese. As the cheese matures, these pockets expand and become larger, forming the characteristic holes. While some people may be put off by the holes, they are actually a testament to the traditional methods used to make this flavorful cheese.

Finding Emmental is not hard. However, Gruyere can be harder to find and will cost a bit more. These are two types of cheese that you would enjoy. Regardless of the cheese you choose, you should be certain that your guests will enjoy meals that include these two great flavorful kinds of cheese.