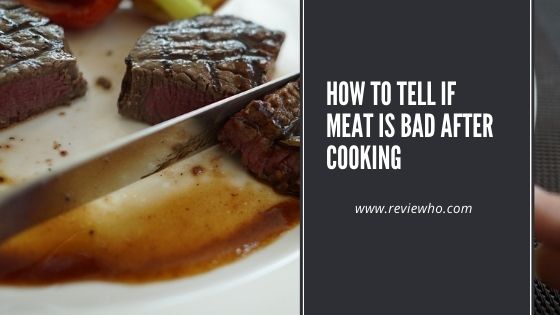 Most people love meat. Since it is enjoyed in many households, it is very common to find some leftover meat in a fridge. In some cases, people will eat meat, regardless of it being bad, maybe because of financial situations, or simply the unwillingness to throw food out. Bad meat can host some bacteria, such as Staphylococcus, Salmonella, Bacillus, Clostridium, or Escherichia coli. It does not matter if it is cooked or raw. It is important to know that intoxication by bad meat is real and could happen to anyone.

Therefore, you should learn how to tell if cooked meat is bad to avoid any such thing from happening to you. This blog post has everything you need to know so that you can be able to tell if cooked beef is bad for ingestion. Read on!

Telling if Meat is Bad

So, let’s start by looking into how to tell if meat is bad after cooking. There are a couple of effective ways of identifying the meat. Let’s get started.

To be honest, there is no way you will notice slime and think that it is a good thing, especially not when it is on food.

If you cook your steak and you notice that it has a certain slime texture, you should take that as a show of going bad. This slime might not always be noticeable by the naked eye. However, when you touch the meat, you will notice this slime.

When the slime is noticeable by the naked eye, you will notice a sort of yellowish hue when exposed to light.

The reason for this slime is the development of bacteria. It should be an adequate sign that you should not eat the meat but should instead throw it out.

Note: Spoiled meat does not develop the slime all over. It can be only a small patch. You have to check it all around before you serve it.

Discoloring meat can surely be repelling. Nevertheless, discoloring does not always mean that the steak is no longer safe to eat.

When you slaughter an animal, the meat will be exposed to air and there will be reactions between the oxygen ad the proteins. In this process, the meat will go through several stages before equilibrium is achieved.

In the first stage, purplish-red color forms as a result of oxygen and myoglobin reacting.

In the second stage, a cherry red hue will be noticed after a bit of exposure to air.

The final stage takes about three days and it is when the myoglobin has reacted completely with the oxygen and become metmyoglobin.

You should know that the color change by itself might not necessarily indicate that the meat is going bad. But it might darken significantly and show some other signs we have described. If it does, you can simply throw it out.

Cooked meat has a certain appealing smell that will almost drive you nuts. If your meat goes bad, you can expect a bad odor to come from it. This might be similar to the smell of ammonia or eggs. The bad odor might even make you feel sick.

With that in mind, you should know that there are other dry-aged types of meat that will have a certain smell similar to cheese caused by the release of lactic acid. If the meat is dry-aged, the smell might not necessarily prove that it is bad meat.

You can check the nature of meat by touching it. You can expect a firm consistency that will break apart when you squeeze it. That is the texture of good meat.

Bad meat will have a slimy or sticky texture that is caused by spoilage bacteria. If you note this, you should throw it out. Additionally, make sure to clean your hands to avoid spreading the bacteria.

If you feel a slimy or damp texture on the meat, you should know for a fact that it has gone bad. When you notice this, avoid using your tongue to taste it. However, you can use any other measures to check it but do not put it in your mouth since it might result in food poisoning.

It is easy to tell if pork is bad after cooking. Normally, pork, when cooked, will go for a maximum of five days inside a fridge without going bad. However, you might notice that it might start developing an unpleasant odor, or mold might grow. This is the easiest way to tell that it is time to throw it out.

When looking at ways to tell if cooked meat is bad, we mentioned the presence of bacteria in bad meat. Cleaning the meat will not rectify it enough to eat. It is the best advice to throw out the meat.

If you cook spoiled meat, is it safe to eat? It is quite dangerous to eat or taste spoiled meat. The pathogenic bacteria that are found in the meat will cause illnesses that might lead to death. It is best to avoid even tasting bad meat.

One of the ways to tell if cooked steak is bad is by keeping tabs on the dates. You should record the date on the meat when you place it in a fridge. If it stays in the fridge longer than 5 days, it is probably gone bad.

We should all know how to tell if meat is bad after cooking. The methods above should give you a good idea of whether the meat you have is bad or not. You should be able to tell with ease and avoid it. We recommend that you throw it out and getting fresh meat. Remember to cook it properly to kill any possible bacteria that might be growing on it.