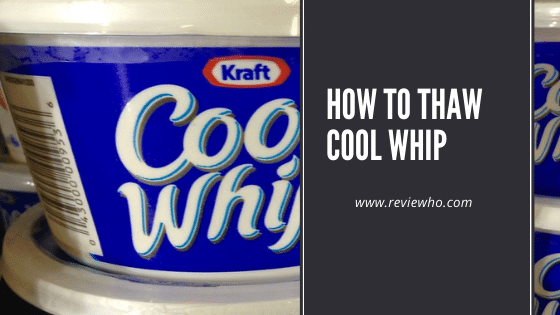 Most people store their cool whip in freezers until it is time to use it. You will require to thaw the cool whip once you decide to use it. The best way to do that is to place it in a refrigerator for a few hours, or overnight if possible. This method will allow the cool whip to retain the flavor, texture, as well as consistency. This, however, would require you to plan ahead of time.

In case you do not have much time, you can thaw cool whip easily in less time. The methods provided in this post will help you learn how to quickly thaw cool whip. You need to be careful because if you fail to thaw the cool whip in the right way, you will destroy it and you will have to rush to the store for more.

Cool whip is made from cream and skimmed milk. These ingredients tend to spoil fast if you let them sit in temperatures higher than 40 degrees for a long time. Therefore, you need to follow these steps properly.

The maximum time you can allow cool whip to sit at room temperature is two hours. If the room has a temperature that is higher than ninety degrees, the cool whip should sit for one hour.

If the cool whip sits for longer, there will be changes in the texture and consistency. Therefore, you have to be extra keen on the cool whip if you use this method.

A microwave will work perfectly in thawing your cool whip. However, you need to be attentive because it only takes a few seconds.

Place it back in the microwave for an additional thirty seconds. Repeat this process until the cool whip is thawed. The total time it should take is three minutes.

There are problems, however, with this method. First, this method will change the cool whip’s texture. If you fail to stir it each 30 seconds, you will have a messy liquid from the cool whip, which will turn yellow and will be useless.

The second problem is that you cannot put the cool whip back into the freezer. When you microwave the cool whip, the texture alters and a freezer will not help correct that problem. If your process ends with the yellow syrup, you will get a frozen syrup block when you use the freezer.

Some people would prefer to use lukewarm water for this process to reduce the waiting time. However, this is a risky choice because your cool whip might change completely. To avoid heating up your dairy products too quickly, it is advisable to use cold water.

Problems that Arise when you Thaw Incorrectly

What happens when you thaw cool whip incorrectly? Several problems will come up if you do not do it the right way.

You will have a problem with the quality of the cool whip when you using the countertop for thawing. Sitting for a long time at high temperatures will turn it bad.

At room temperature, thawing the cool whip will liquefy it. If you fail to beat the whip gently and become too rough, it will reduce in volume. You should be careful not to beat it roughly so that you maintain the consistency and texture of the cool whip.

Using a microwave in the wrong manner will ruin the cool whip completely to a point where you cannot use it again and will have to purchase another.

How to Thicken Cool Whip

While we are discussing how to defrost cool whip, you are probably wondering, “what can I do to cool whip to thicken it up?” Well, the answer is that you can thicken cool whip using any of several available methods. The preferred method will depend on the texture and taste you want your cool whip to have.

One of the ways that most people have tested is by adding powdered sugar. The sugar has cornstarch. This element will absorb the liquid in your cool whip. It works perfectly in thickening frosting. Adding a teaspoon will absorb the liquid. However, this is best when your cool whip has the desirable taste and you do not intend to make it any sweeter.

You can also choose to add cream cheese. It also affects the texture and taste. However, instead of adding a sweet flavor, it will add a creamy one.

Jello pudding will also have a great effect on your cool whip. If you do not intend to change the taste, you can use unflavored pudding. Vanilla pudding will add a flavor to the cool whip.

You have a few ideas on how to thaw cool whip and how to thicken it up if it becomes liquid. You should be careful with these methods because you risk messing up the entire thing if you make one wrong move.

2 thoughts on “How to Thaw Cool Whip – The Complete Guide”