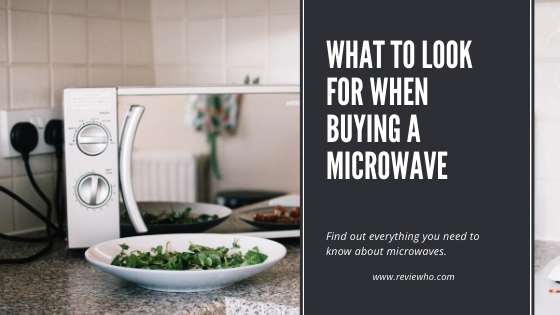 I once had a microwave that would not stop beeping until I opened the door. And it was not a soothing sound either.

I’d love to get my hands on the guy who decided that an appliance with a sound like a truck backing up was a good idea.

And I’m not alone here. Just look at the number of fans on the Facebook page, “I want to replace the annoying microwave beep with my favorite song.” The first company that comes up with that technology is going to sell a lot of units!

When it comes to buying a microwave oven, reviews agree that the quality of the beep is often the most important feature!

All microwave ovens function in the same way. The appliance’s magnetron sends non-ionizing radio waves through your food, exciting its water molecules and causing it to heat up.

This does not heat the surrounding air, just the food itself, which is why standard microwaves don’t make your food brown and crispy.

If you want to avoid the grey meat effect, you will need an added convection feature that includes a separate element to heat and circulate the air in order to brown your food.

What To Look For In a Microwave

The Basics of Microwave Oven

Almost all microwaves will heat your food adequately. Their price depends on the features you are interested in. For instance:

Power: The amount of maximum power microwaves use varies from 600 watts to over 1600 watts, with compact microwaves averaging about 800 watts and full-size microwaves 1300 watts. The greater the amount of power the faster your food will cook, though more power does not necessarily indicate a better product. A 100-watt difference isn’t very important.

Size: The best microwave oven size for your needs depends on a number of factors. If you will be using it in a dorm room or have very little counter space, you will want a smaller microwave oven. If your family is large or you plan to cook most of your meals in the microwave, including things like roasts, you will obviously need a larger microwave. To be able to fit a large dinner plate, the microwave will need to be at least 2 cubic feet.

Convection: Because microwaves only heat food without browning it, you may want a convection oven that will allow you to roast, toast, and bake food as you would in an oven. (It is actually an oven, with the added feature of heating the food by microwaves). Though the results are not quite as good as when using an oven, if you do not cook a lot it may be sufficient for your needs.

Turntable: Though some baseline microwave ovens come without a turntable, it’s advisable to have one, as the turntable helps heat your food evenly. Some “turntables” actually move the tray from side to side.

Our microwave buying guide may not be able to keep you from cooking a rubbery hamburger, but they will certainly help you to avoid the ones that sound like a garbage truck backing up in your kitchen.