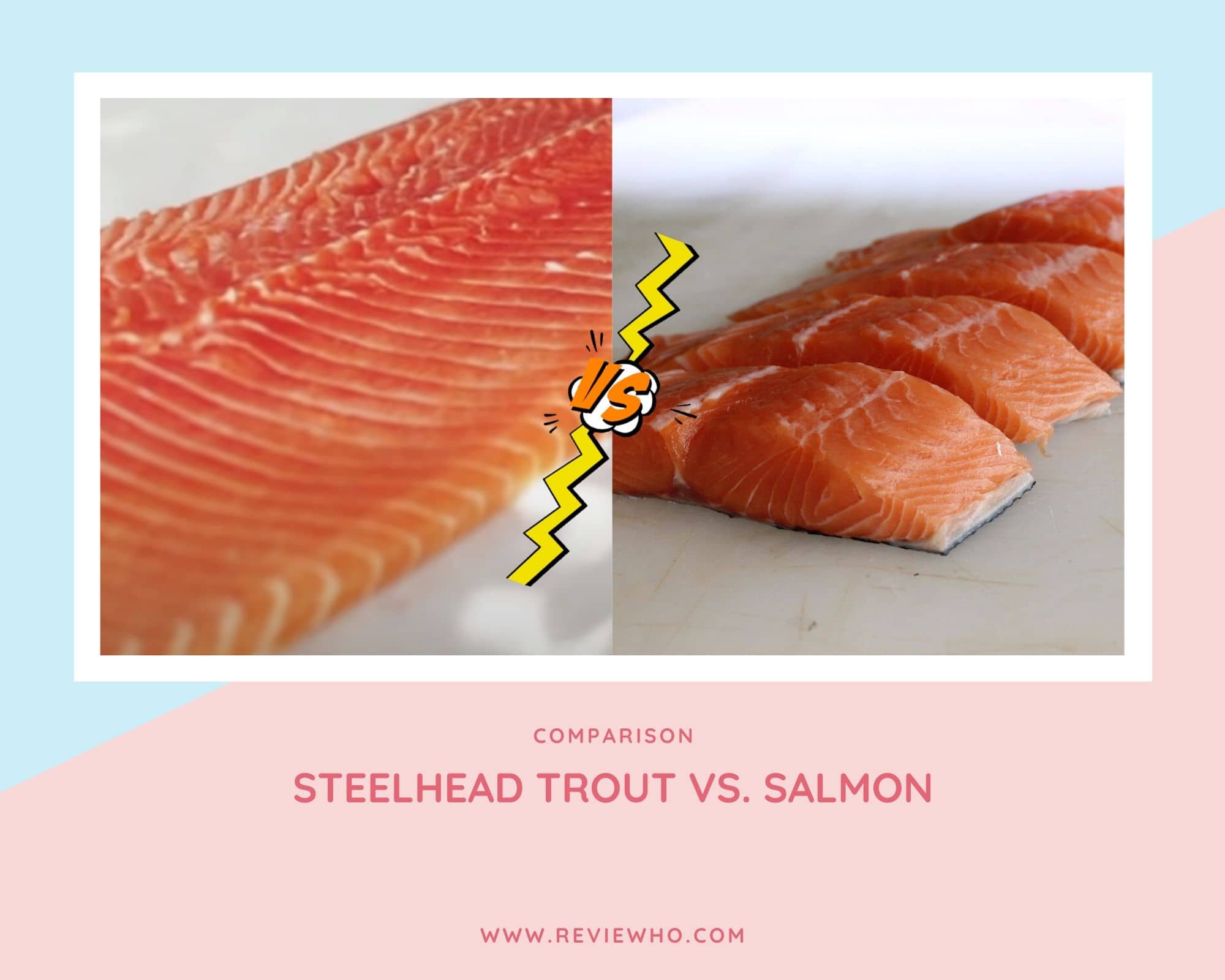 Before you purchase a certain type of food and include it in your diet, you need to decide on the nutritional value of the food. You have to know the nutritional value that it will add to your food that is different from others. The most important nutrient that you find in fish is omega 3 fatty acids. However, these are not the only differences that you will find between fish.

In this post, we handle trout vs. salmon nutrition and note other differences that you should know. The steelhead trout vs. salmon debate should help you make a better choice for your diet when you go to the market.

Salmon’s appearance is different from steelhead trout in that a salmon is streamlined more than a steelhead trout. In addition, you will rarely find black spots on the lower half of a salmon. A trout has a flat tail while a salmon tends to have a more concave tail. In regards to the appearance, it might be hard to differentiate the two because these are the only differences they have.

The names, salmon and trout, do not identify their science classes or the places they live. They are more of a branding.

Pacific trout and salmon are the biggest groups available in North America. The group has five different types of salmon and two trout types, which are considerably more widespread. Normally, this group is found in the Pacific coast with the most common fishing areas in California and Alaska. You can also find them in Great Lakes.

The original salmon and trout are mainly found in the Atlantic and can show up in Europe and North America.

The difference in their Tastes

The steelhead trout vs. salmon taste is one of the major considerations that people think about when choosing between the two. Some of the salmon types have better taste than some trout types and the reverse is also true.

The flavor of a salmon is pronounced more compared to a steelhead trout. Most people even think of it as sweet.

The trout, on the other hand, has an unassuming and mild flavor. The flavor can work well with certain spices and seasonings. The trout is also firmer than a salmon, which is delicate. In addition to the delicacy, the salmon’s flesh also tends to be flaking when baked or grilled. The cooking methods that you use on the two fish will provide different tastes.

A steelhead trout does not have a fatty mouth feel like the salmon does. The flavor is, therefore, more delicate. It works perfectly in tacos, soup, or salads. The taste difference between steelhead trout versus salmon depends on your preferences. You have to choose one that you fancy more.

Steelhead trout nutrition vs. salmon nutrition is an important consideration when you are choosing between the two. Is steelhead trout as healthy as salmon? Well, the salmon and trout are both perfect omega-3 fatty acids sources. Salmon, however, has less cholesterol in total compared to the steelhead trout. In a single steelhead trout serving of 100 grams, you will find saturated fat (2 grams), protein (20 grams), and 120 calories.

If you serve the same amount of salmon, you will have saturated fat (3 grams), protein (22 grams), and 150 calories. The salmon has a higher level of Vitamin D content compared to the steelhead trout. The trout, on the other hand, is richer in B vitamins.

In regards to the health benefits, the salmon and steelhead trout are rich in Omega 3 fatty acids, which help in the reduction of cholesterol levels and help in fighting chronic inflammation. The protein content in both fish is high. This level of protein content is very important in growth, as well as the development of the human body.

Both the steelhead trout and salmon tend to go back to their places of birth to spawn. They move back into the wild when it is over.

In regards to spawning, they are different in that a steelhead trout will spawn severally each year. This is possible because the trout will be able to avoid deterioration after spawning. The steelhead will spawn several times, over and over, living for several months or years. The salmon, on the other hand, will die after the first process of spawning. The reason for this is that a salmon releases steroid hormones referred to as corticosteroids. The release of these hormones leads to a fast deterioration of a salmon’s body.

In general, salmon lives in salty water and freshwater throughout its life. The steelhead trout will live in one or the other for its entire lifespan. A steelhead moves to the salty water a few days after it is born and will only return to the freshwater when it is time to spawn.

In regards to feeding, the salmon and steelhead trout will eat the same food. They are fond of krill, which makes their meat extremely pink.

If not for the difference in steelhead trout vs. salmon cooking, the meat is hard to identify.

These two fish have subtle differences even in their flavors. If you do not eat them quite as often, you may not be able to tell the difference. You should try both these fish for your diet. There are several interesting ways for preparing them.