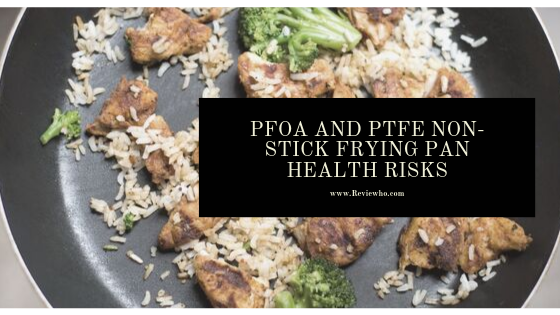 Cooking has become a passion for a majority across the globe. Thousands of those passionate people today have come up with their very own YouTube channels and earn from it. What plays a key role is the cookware that one utilizes.

A majority around the world have selected non-stick pots and pans for satisfying their regular cooking tasks. Now, you know why the non-stick pots and frying pans have become the preferred choice of a majority? It is due to the non-stick coating that works perfectly for items like pancakes that might ultimately stick to any other cookware. And, they appear to be extra-ordinarily graceful when placed on the shelves.

PFOA or Perfluorooctanoic is a man-made chemical that aims to resist heat, grease, water, and sticking of food. It is a chemical, burnt by the manufacturers during the preparation of non-stick pots and pans which are then removed. But, it stays on the object despite being disappeared. Not just the cookware, this synthetic compound is also applied to the carpets and stain-resistant fabrics.

“According to the research, the chemical has a strong impact within the environment as it holds the ability to contaminate air, water, and soil”

Does exposure to PFOA have any side effects?

PFOA has been directly connected to a large number of health problems that include the following;

“According to the latest research, PFOA has been revealed in the bloodstreams of the individual as a result of their blood test”

What is PFOA free?

A majority of brands for non-stick cookware today claim to be PFOA free, but they do make use of PFTE in manufacturing. Now, what PFTE is? It is also a man-made compound that also comprises PFOA, helping the surface of the cookware to form a smooth layer.

Hence, preventing the food from sticking. So when the manufacturer says that the particular non-stick cookware is PFOA-free, it means that no use of PFOA has taken place in the production.

Although PTFE also includes the PFOA, it is not considered as damaging to health. It has not been determined as a toxic ingredient, thereby claiming to be safer for the consumption of humans. One of the core reasons is that it does not react with the other chemicals, either inside or outside of the cookware.

“According to the latest researches conducted by the health and safety departments of countries, PFOA-free cookware is prone to release the fume during cooking. The fumes are dangerous to health and this is why it must not be inhaled. Hence, recommended not to overheat the pans”

Although non-stick pans are referred to as a blessing when it comes to cooking, the controversy around nonstick coatings has raised concerns. This is why safety precautions must be followed to ensure safe, healthy, and convenient cooking via following the tips as below;

The alternatives to nonstick cookware

Non-stick pots and pans are indeed trendy, but when it comes to longevity, iron skillets can be used by the generations where the non-stick cookware can only last up to 5 years. Even if the visible scratches are seen on the surface, this means the PTFE chemical is flaking.

But, it is not anything harmful to health. Besides thinking about its old-fashioned alternatives, it is better to look for a good one and keep the above tips in mind for its maintenance.

Here are a few other hand-picked articles for you to read next: