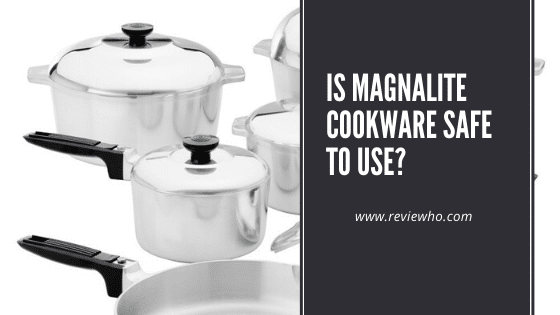 Magnalite is an aluminum cookware product that was brought into the market in the 1930s by the Wagner Ware. The product was a huge hit because it functioned better than the cast iron products in regards to heat retention and distribution.

This product saved the Wagner Company in the Great Depression. Although this product was a huge hit, it was also the downfall of the company after researchers decided to research the effects of aluminum on humans. In this post, we highlight some of the major findings of the company and help answer the question, “are Magnalite pots safe to use?”

The product’s manufacture involves the pouring of aluminum in molds. The aluminum element is a good conductor of heat and has a quick reaction to changes in temperature, which is why it is used in the creation of Magnalite cookware. Its reaction to temperature changes allows you to cook with precise heat control.

You can find Magnalite cookware in form of pans, oval roasters, Dutch ovens, as well as stockpots.

Researchers, in 1965, aimed to identify the effect of aluminum on humans. To get their findings, they used rabbits, which were exposed to aluminum. The metal resulted in neurofibrillary tangling inside the brains of the animals. The researchers concluded that the ingestion of aluminum salts resulted in Alzheimer’s disease.

After more experiments on animals, researchers found that the animals that did not have aluminum in their systems were in better physical conditions and therefore did better when physical tests were carried out. In addition, the offspring of animals that had aluminum were weaker.

The scientists in the modern-day, however, believe that Alzheimer’s disease is not associated with aluminum levels in a human body. The reason behind this is that the neurofibrillary changes resulting from aluminum do not match the Alzheimer’s disease.

The World Health Organisation states that a human can take in 50 milligrams of aluminum daily. Foods that have the highest aluminum quantities are acidic foods, which include citrus fruits and tomatoes. A study was carried out to make tomato source in an aluminum pot for a period of two hours and proved that the quantity of aluminum was 0.0024 mg per cup.

Aluminum Effects on your Health

Research states that ingesting large amounts of aluminum will result in damages on the liver, respiration, as well as the kidneys. These problems will then risk Alzheimer’s disease. The aluminum ingested in large amounts will turn to a dangerous toxin.

You will find aluminum in certain natural foods in small quantities. Aluminum is present in water and soil naturally. Therefore, the plants will absorb the element. You will find that foods such as vegetables, milk, meat, and grains have low levels of aluminum. Certain plants such as spinach, mushrooms, and tea, have the ability to absorb the element from soil. These plants will, therefore, have higher levels of aluminum.

Your body is likely to be exposed to aluminum with ease. However, it does not always symbolize danger. The body has the ability to remove aluminum. The liver should be able to remove the aluminum content in your body fluids and blood, releasing it out of the body through urine. The liver’s capabilities, however, are limited. If you ingest the element in large quantities, some of the body organs will be at risk of corrosion and other problems.

Effects of Aluminium Cookware on the Food

Aluminum is used in different ways including foil wrappers, pans, and pots. What is the effect of aluminum on the safety and quality of the food that is produced?

Research states that using aluminum in cooking food will result in the absorption of some quantities of aluminum in the food. Cooking with aluminum foil is more dangerous compared to cooking using other cookware made with aluminum. When you prepare baked meat that is wrapped in aluminum foil, the aluminum content in the meat will increase to levels higher than 80%.

Using Magnalite cookware in preparing your food will also lead to the absorption of aluminum microparticles. The aluminum levels are therefore increased even though it is by a smaller percentage.

The temperature and the type of food being prepared will affect the absorption rate. Some of the food components, including salts and acids, will increase the food’s oxidation power and aluminum will, therefore, be absorbed with ease. High temperatures also make it easier for food to absorb the element.

Is it safe to use Magnalite Cookware?

High levels of aluminum will be absorbed in your food if it comes in direct contact with untreated aluminum. If you leave the aluminum foil on salty or acid foods, it will be pitted after a few hours.

However, Magnalite cookware will not result in the absorption of aluminum in your body. Here is the reason why.

Most of the cooking utensils made using aluminum are anodized. That process will change the structure preventing the aluminum from being absorbed by foods, even salty and acidic foods. Most of the medical authorities and communities concluded that you can use anodized pots and other utensils without worrying.

Research shows that the body takes in the highest levels of aluminum through the skin and not the digestion system.

So you can be sure that Magnalite cookware is completely safe to use. Using the cookware will not result in the ingestion of aluminum through the food.

How to Decide on the Best Cookware for your Kitchen

One major way of ensuring Wagner ware Magnalite safety is by purchasing cookware made with anodized aluminum. Anodized aluminum is aluminum that goes through a process that increases the oxide layer’s size. The layer creates a boundary or barrier between the food you are cooking and the aluminum that is hidden within. It also helps increase the cookware’s durability.

In case you use cookware that does not have anodized aluminum, you risk ingesting higher levels of aluminum. To avoid that, you should prepare foods that are low on acid and salt such as potatoes.

If you have an anodized cookware set, avoid using utensils made of metal because they scratch the layer and might expose the aluminum encased inside.

In addition, be careful when washing your aluminum set. It should cool well before you wash it. The sudden temperature changes will deform the bases and will compromise the oxidized layer.

Is Magnalite cookware still made? Yes, it is. It is much safer due to the extensive research that has been carried out over the years on aluminum. The companies that manufacture the cookware are careful to eradicate any chances of aluminum ingestion through food that has absorbed the element. You should be careful to ensure that the set you are using has an oxidized layer that will keep your food from absorbing aluminum.