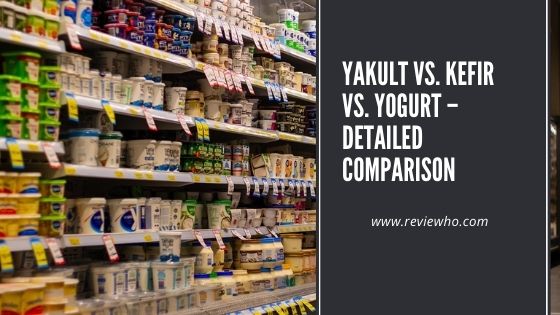 Gut health is very important and cultured milk is among the most popular practices that help improve it. This is a very old practice that has been known to be effective in that regard. There are different types of milk you can purchase, brought to the market by different brands.

Have you heard about Yakult, or maybe kefir, or yogurt? Well, when it comes to cultured milk, these are among the most popular. Regardless, you might wonder about the differences between the three. Is Yakult a yogurt? Is Yakult Kefir?

You do not have to wonder any longer about these three. We have done an extensive research to bring you this detailed comparison of the three. We will compare Yakult vs. kefir, after which we will talk about Yakult vs. yogurt differences. Stay tuned!

Before we get into the detailed comparison, we should discuss Yakult, kefir, and yogurt individually for a better understanding.

Simply put, Yakult is a probiotic drink from Japan introduced to the market in the 1930s. To make it, milk is fermented with a certain bacteria strain known as Lactobacillus casei Shirota. When the milk is fermented, it gets a mildly sour taste, which is also sweet. Cow milk is always used to make Yakult.

Unlike Yakult, kefir is from Eastern Europe and is made by introducing kefir grains in some milk. You can choose to use sheep’s milk, goat’s milk, or cow’s milk. The most common type of milk used, however, is cow’s milk.

The grains feature yeast and bacteria that help in the fermentation of the milk’s lactose. The result is a sour and tangy taste.

Among the three, yogurt is the most popular. It is simply fermented milk made following yogurt cultures. The fermentation of lactose produces lactic acid. This acid then reacts with the protein, resulting in the tart flavor produced. In most cases, it is made using cow’s milk, even though it is made from other types of milk including yaks, camels, ewe, and goats.

The general color of yogurt is white, the texture is creamy, and the flavor is sour.

We will now compare the three variations for a deeper understanding of their differences.

Is Yakult Kefir? No, it is not. There are several major differences between these two. Here are the most common.

When you look at the two broadly, there isn’t much difference in preparation. They are both made by fermenting milk using bacterial culture. The bacteria will act on the milk’s lactose and produce lactic acid.

However, Yakult is made by adding a single strain of bacteria (Lactobacillus casei Shirota) to the milk. Kefir, on the other hand, is simply made by adding Kefir grains, which contain a combination of multiple bacteria and yeast strains. These are responsible for turning lactose into lactic acid.

While Yakult is made by adding a single strain of bacteria, there are more than 30 strains included in the preparation of kefir.

One of the main kefir vs. Yakult differences is the type of milk you can ferment. While you can use different types for kefir – including sheep’s milk, goat’s milk, and cow’s milk – you can only use cow’s milk for the production of Yakult.

Is kefir better for you than Yakult? The simple truth is that there aren’t many types of drinks that can work on your health like kefir can. It is a drink filled with important minerals and vitamins. Apart from being a great source of Vitamin D and A, it is a rich source of Potassium and Calcium.

You will also notice that it features a lot of different strains of good bacteria produced when fermentation occurs.

Even though Yakult is a great source of nutrition, it uses non-fat milk and certain additions that are the main source of caloric value it has. It is among the major differences between Yakult vs. kefir.

It is true that Yakult and yogurt are made using a similar process. However, some differences set them apart.

The main difference between the two is the type of bacteria that is used for the fermentation process.

Remember, however, that yogurt is not always made as a probiotic drink. Not all available brands make yogurt with live probiotic cultures. Regular yogurt, therefore, does not have the same benefits that Yakult has. In case you need yogurt with probiotic content, make sure to check for a seal that proves the presence of these active cultures.

In most cases, Yakult contains the original flavor after fermentation. For yogurt, however, you can choose from a wider range of options. Additionally, Yakult can only be in a liquid form while yogurt can be sold as a liquid or a cream.

This is also among the popular differences between Yakult vs. yogurt. Yakult contains sugar, which is useful in the fermentation process. Original yogurt, however, does not have any sugar content.

Everyone has his or her preferences when it comes to such drinks. Even though they are all nutritional and helpful in one way or another, you will have a certain preference. Now that you know the difference between these three products, you should be able to make an informed choice. The only thing we recommend is that you choose the one you think has more benefits.