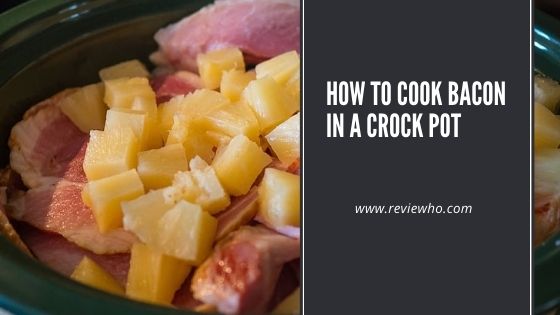 Have you used a slow cooker (crockpot) before? If you have a slow cooker, you know that it can prepare a range of foods; almost anything. But there are certain exceptions. For instance, if you slow cook seafood, chances are that it will end up rubbery and overcooked.

So, what about bacon? Can you cook bacon in a slow cooker? You might know that certain high-fat meat cuts such as lamb shanks, pork shoulders, as well as chuck roasts, tend to cook perfectly in a slow cooker. Unfortunately, it is not the same with bacon.

In this post, we will be talking about everything you need to know regarding cooking bacon in a crockpot. By the end of this post, you should be able to know all the dos and don’ts of slow cooking bacon.

Cooking Bacon in a Crock-Pot

Can you put raw bacon in a crockpot?

The first thing you need to know about pork is that it is a thinly sliced piece of meat that is meant to cook fast under high heat. That way, it will develop a crispy exterior and a chewy interior. With that in mind, you can understand why bacon would not be the best candidate for slow cooking. If slow-cooked, it will possibly dry out.

You should not be surprised because slow cooking is not meant to get food crispy. People have tried cooking bacon in a crockpot but unfortunately, the reasons are not that good.

So, how do you go around it?

Some recipes would indeed require a slow cooker and these meals would be better if they had some bacon for the texture and the flavor. So, let’s see how to cook bacon in a crockpot.

We have concluded that bacon would not have a desirable texture when cooked in a crockpot. So, how do you add bacon without ruining the entire meal with poor texture? It is quite simple. First, you could cook the bacon using a separate method and then add it when everything else has been cooked.

It is understandable if you think that this might be too much effort. But if your slow-cooked meal would only work if there was some bacon, then you can take some extra time to cook it using an oven or using a frying pan until it becomes crispy. You can then add chopped bits of the bacon to the dish you are serving.

But that is not the only solution for cooking bacon in a crockpot. If you do not have the time to prepare the bacon as a separate dish, you can choose to use some ham hock as a replacement for bacon. It is an amazing piece of meat that will give you a pork flavor that is also salty and smoky. Ham hock will cook perfectly in a crockpot. All the collagen and the fat will be rendered to provide the entire dish with an amazing flavor.

Truth is that there are cooks who believe that cooking bacon slowly on low heat is better because it results in tender bacon. If you want to give it a try, you should add some bacon, some garlic, onion, and around 8 cups of water to the crockpot place the lid on it, and cook it on high for around 5 hours. If you want to cook it on low heat, you can cook it for around 9 hours.

Does bacon get crispy in a slow cooker? When you cook bacon in a crockpot, you should not expect a crispy piece of bacon.

Can I keep it warm in a Slow Cooker?

A slow cooker is a perfect appliance to use when you want to keep your bacon warm. It is not only effective but also very easy to use when keeping the bacon at a warm temperature.

All you need to do is place the bacon in the crockpot, turn it to low heat and it will do the rest. It will maintain the constant temperature of the bacon without messing it up while you prepare the rest of your meal.

Can you Cook Bacon in Advance?

You do not have to use bacon the same day you prepare it. If you have a large batch of bacon to prepare, you can do it in advance. The best thing to do is to cook it until it starts to form a crisp, but not all the way through. It will allow you to reheat it and wait until it becomes fully crispy. When it comes to reheating it, the best method to use would be a toaster oven or an oven.

The maximum time you have is two days. Therefore, do not cook it more than 2 days before you need to use it.

Mistakes you make when Cooking Bacon

There are certain mistakes that we make unknowingly when preparing bacon. These might be the reasons why bacon does not turn out as we hope when preparing it.

The first, mistake is using a hot pan to cook cold bacon. The main problem is that the fat on the bacon requires time to render and warm. Instead, it will start seizing and the bacon will become gummy.

Another mistake is using the wrong cooking tools. Bacon is best made using cast iron skillets. This type of skillet features a heavy bottom that will be able to conduct heat evenly. You will not end up with burned edges that aluminum skillets will give you.

Answer: Yes, it will. I’ve done it many times. The key is to preheat your crockpot on high temp and use a rack to elevate the bacon so it’s out of the grease. This will help it crisp better since there will be less moisture in contact with the bottom of the pot. I’ve seen recipes where people just used a cooling rack from their ovens and stuck it in their slow cooker. That’s one way to go if you have one handy.

Answer: You can either cook the bacon on the stovetop before adding it to your slow cooker, or you can cook it right in the slow cooker.

Answer: There are two ways to cook bacon in the Crock-Pot. One is to put the raw bacon into your slow cooker and cook it on high for three hours or until crispy, or low for six hours and thirty minutes. When you’re done cooking, transfer the cooked bacon to a paper towel-lined plate so it can drain some of its fat away from it before eating.

Can you cook bacon in a slow cooker? You need to cook bacon the proper way to get amazing results for your entire dish. You want to know how to cook bacon in a crockpot and certain recipes include other foods such as beans or cabbages that might work for a crockpot. However, you need to decide what type of texture you want after the food finishes cooking.