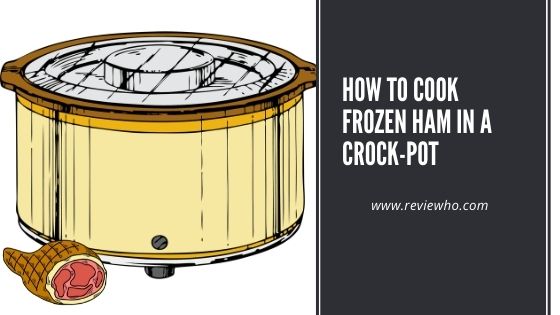 A delicious, tender ham can be the pièce de résistance of any meal, whether it’s a big holiday gathering or a simple weekday dinner.

Whenever there is a holiday, there is a ham on my table. I love cooking ham because most of the work is done before the package is even opened. All you need is a delicious glaze, and a slow cooker for the frozen ham. Wait, there is more!

Do you really want to learn how to make your slow cooker do all the work? Read on to find out.

How to Cook Frozen Ham In a Crock-Pot

What do I do if my ham is too big for a slow cooker? If your ham is a bit bigger and your pot lid isn’t fitting, slice off the excess and set it by the side. That’s it!

To cook a frozen ham in a crockpot:

Make sure that the flat part sits at the base of your pot with the fat side to the top.

You need to add some moisture to the frozen ham in a slow cooker by throwing in some pineapple juice and pineapple chunks around the ham. Using only the juice works just fine since it is the moisture that we’re going for.

When adding the pineapple chunks, make sure that it is not too much, you don’t want to overload your pot. You can also use any flavor profiles that you enjoy.

Hams are salty and will need some definite extra sweetness. To go with the pineapple flavor already in the pot, add some brown sugar or real and natural maple syrup.

Are you more into savory than sweetness on your ham? Just add some Dijon mustard and a little amount of pineapple juice instead. It also works perfectly; it fills your ham with flavor to turn out with great fool-proof hands-off results.

How Long to Cook Frozen Ham in Crock-Pot?

All you have to do is reheat frozen ham in the crockpot, they are cured so you just have to bring them to temp. How long it takes to cook a frozen ham in a crockpot varies depending on the size of the ham.

It takes about 6 to 8 hours to cook a frozen ham on low temp, but for a bigger ham, you would have to cook for about 12 hours for it to be well and evenly cooked. You just want to bring it to a temperature. With pork, your safety zone is above 160°C.

With this simple method, anyone should know how to cook a frozen ham in a crockpot. Now, you have an easy dinner!

Recommendation: Do not just throw your frozen ham in a slow cooker. It is advised to thaw it in a fridge for about 24 hours to avoid uneven cooking and dangerous bacteria growth.

Answer: No, the plastic wrap should be removed during cooking time.

Answer: I’ve never had a problem with my ham drying out in the slow cooker. Always preheat your ham low on slow, warming a ham on high runs a higher risk of drying out and making the meat tougher.

You can also add some liquid to the slow cooker such as ginger ale, apple, or orange juice to infuse more flavors into your ham.

Answer: Gammon can take between 4 and 8 hours to cook in a slow cooker. The time depends on the size of your gammon, so make sure you have plenty of time before dinner.

Answer: The answer is yes, but it’s not as easy as you might think. Hams take hours of cooking time to reach the right internal temperature and texture. If your crockpot isn’t set up properly or if you don’t have a meat thermometer, the results could be disastrous.

The best way to avoid overcooking your ham is by using a digital meat thermometer or probe thermometer when cooking hams in the slow cooker.