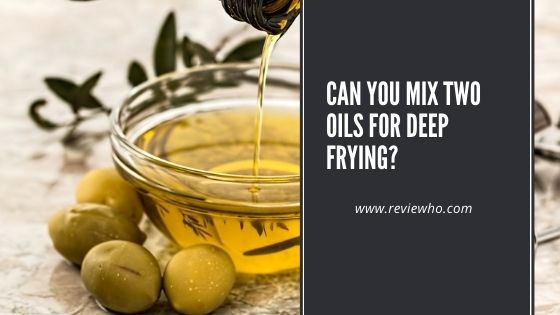 Imagine this. You are frying some amazing food, or you are planning to, only to realize that you have bottles of different oils that are almost empty. The first thing you would probably think about is the possibility of mixing these two oils and using them together to fry the meal you want. Can you mix oils for frying? The truth is, we have all been in that dilemma.

Which Oils Can You Mix? 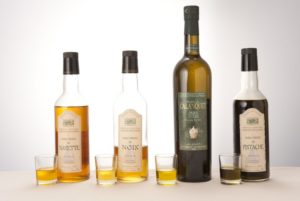 In this section, we will highlight most of the possible oil combinations and let you know if it is a good idea or not.

Can you mix vegetable oil and canola oil? Vegetable oil contains a blend of different vegetable oils. It has sunflower, corn oil, olive oil, and more. So, to answer the question, Yes, you can. Vegetable oil mixed with canola oil will have the same smoke point, which is around 400 degrees Fahrenheit, making it a perfect option if you want to fry at high heat levels.

Can you mix vegetable oil and olive oil? 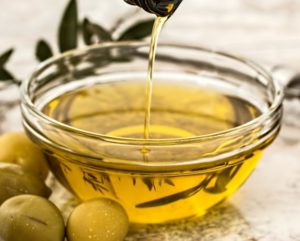 Yes, you can. This mixture should be perfectly okay given that your olive oil features a high smoke point that is high enough to fry your food at your desired temperature. In most cases, olive oils feature a temperature that is around a minimum of 390 degrees Fahrenheit. That temperature is quite safe for deep frying.

Note: Avoid the use of extra olive oil, whose smoke point is closer to 350 degrees Fahrenheit. 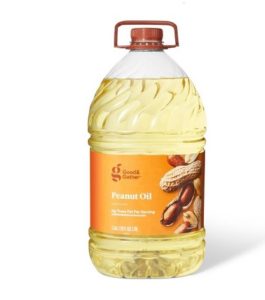 Remember, this all depends on your specific oil brand. The peanut oil might have a lower smoke point than the vegetable oil you want to mix with. Therefore, you should keep an eye on that. 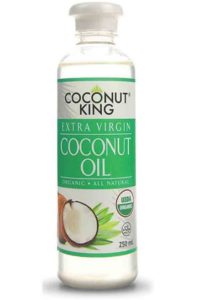 Consider the type of vegetable oil you are using and avoid getting to the lowest smoke point of the two. It is important to know that your coconut oil will give your food a nutty flavor.

First, bacon grease will have some pieces of bacon inside it. Even after you filter it, it will affect the flavor of your oil. 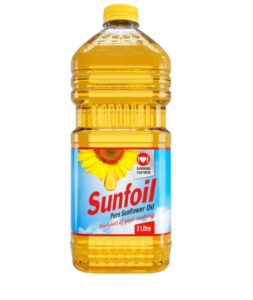 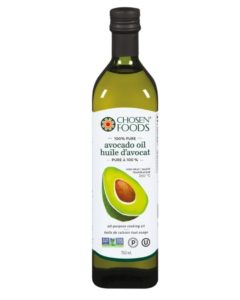 Avocado oil is pressed from the avocado pulp, which contains around 25 percent of fat. The oil produced from this process features the highest smoking point. No other plant-based cooking oil can reach this temperature. It reaches around 520 degrees Fahrenheit, which means that it is a perfect choice for sautéing at those high levels of temperatures. It also has a sort of neutral flavor and has high levels of monounsaturated fats. 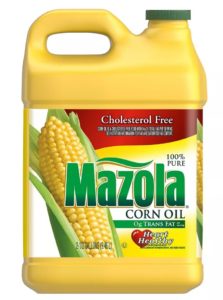 Corn oil is one of the most important oils in a kitchen. It features quite a high smoke point coupled with a very neutral taste. One of its main uses is frying, although there are many more recipes you can use corn oil with, which include stir-fries or baking. 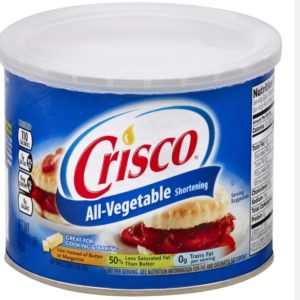 Can you mix shortening and vegetable oil in a deep fryer? Most vegetable oils are in a liquid state when at room temperature. Other shortenings, such as Crisco, are solid, because of hydrogenation. When you heat this shortening, it will easily turn to liquid and you will be able to create a mixture of the two oils.

One other difference you will note is that shortening will feature a light flavor coupled with a higher smoke point. If you choose to blend the shortening with vegetable oil, you can expect to get the amazing flavor and color that you would expect to get by using the oil or shortening alone. So, how do you do this mixing?

To mix solid shortening with vegetable oil, you need to add the shortening to a pan and place the pan on low heat, allowing it to melt. You can then determine the amount of liquid you would require to get the amount of mixture you want.

Add the vegetable oil that has a high smoke point and then allow them to go back to the normal cooking temperature. As they heat, they will blend perfectly. Mixing cooking oils with shortening is that simple. 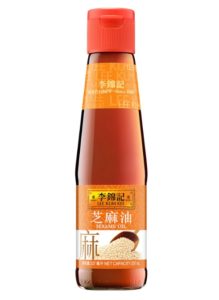 Can you mix sesame oil and vegetable oil? Sesame oil is pressed from some raw seeds. The oil produced features a smoking point of around 420 degrees Fahrenheit. It is a great option if you enjoy stir-frying.

On the other hand, vegetable oils have smoke points that are undefined because they are created from different sources. That means that vegetable oils would be great if you want to fry or cook for a long period. It is possible to mix sesame oil and vegetable oil, although that would depend on the results you want to achieve from the mixture you create.

The smoke point of butter is 300 degrees Fahrenheit. Therefore, when you mix those two, you would have a simpler time frying using a stove. However, when it comes to deep-frying, this mixture wouldn’t be ideal.

Can I mix vegetable oil and grapeseed oil to fry with? When deep-frying, what you want is a type of oil that will be able to get to really high temperatures before reaching its smoke point. Grapeseed is one perfect oil for deep frying because it has a smoke point of 445 degrees Fahrenheit. It is, therefore, higher than some oils such as corn oil or olive oil. 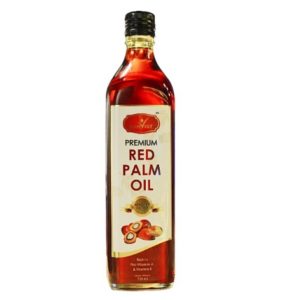 Red oil features saturated and monounsaturated fats, which means it is a great choice for deep frying. It can have a neutral flavor. Nevertheless, some people have concerns regarding the sustainability of harvesting and cultivating the oil.

Can I mix red oil with vegetable oil? It has a smoke point of 302 degrees Fahrenheit. So, can you mix cooking oils such as these? That would depend on what you want to do. You do not want to use a mixture of these two oils to deep fry. It will not end well. The adequate deep-frying temperature is higher than the smoke point of red oil.

As long as the smoke point of the olive oil is high enough to withstand the baking temperature, it would be okay to use the mixture for baking.

These two oils are used in different cooking methods with great results. Nevertheless, these two oils have differences in the way they are made. The uses in which they excel, their nutritional benefits, as well as their unique flavors.

They are some of the most used plant oils on the globe and each of them has a unique set of characteristics.

Crisco is a shortening, a staple used in most southern cuisines. The main reason behind that is that it features the consistency, oil content, and texture that lard has except for saturated fat. Therefore, it is a perfect choice for cooking fried crispy foods like fish.

The shortening is vegetable-based and while most vegetable oils will remain liquid at room temp, Crisco remains solid because it has some hydrogenation. However, when you heat it, it will turn liquid easily, which is good when you are trying to mix the two.

Just like Crisco, vegetable oil features a high smoke point coupled with a light flavor. There are different vegetable oils including corn and canola, even though most are made using soybeans.

You will sometimes find yourself with less Crisco and less vegetable oil than you would require, which brings up the question, “can you mix Crisco and vegetable oil?” After all, they will become more. The answer is, yes, you can mix vegetable oil and Crisco.

Here is how you do it. First, you will have to place the Crisco on a pan and low heat so that it melts. After melting, decide the amount you need to produce. Add a vegetable oil with a high smoke point and light flavor, then increase the heat to the cooking temperature. At that temperature, they will blend

together and you can use them as one to prepare food.

Therefore, you will not be able to identify the unique properties that the mixture will have.

Food manufacturers are preferring to use something except Extra Virgin Olive Oil. The surprise is that they are choosing to use a blend of extra virgin olive oil and a mild oil such as sunflower, soybean, or canola.

First, this mixture is not possible, it is also very amazing to work with. Secondly, even though the extra virgin olive oil is of high quality, it is pricey and it would make much more sense to choose to use a blend with a cheaper option.

A blend of EVOO and canola oil works because canola has a sort of mild flavor. That means that the EVOO will shine in the blend. When you go to the stores, you will find different blends of EVOO and mild-flavored oils such as sunflower.

Mixing Extra Virgin Olive Oil is possible and produces great results for a lower cost. You can also mix the mild-flavored types of oils with Pure Olive Oil for similar results. Just use your imagination.

Can you mix oils for frying? It is possible and quite simple to mix oils when you are planning to fry some food. But there is another different issue. Can you mix two oils for deep frying?

Deep frying is a different issue. Deep fryers work at really high-temperature levels. That means that each oil’s smoke point is quite important. The mixing of oils is not always a good idea. It is not always recommended. Nevertheless, mixing cooking oils might present some benefits.

A general summary is that you can mix oils if you have more information about each oil and its properties.