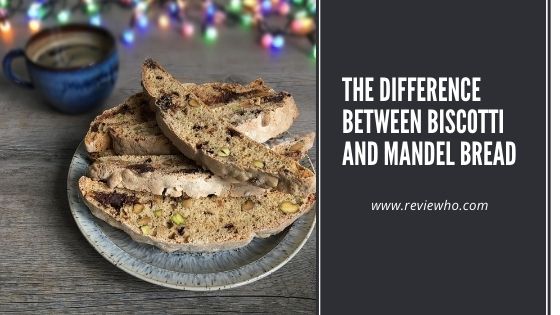 If you are a cookie lover, you probably have had the opportunity to taste biscotti or Mandel bread. Those products are trendy, especially as part of gift baskets or to accompany a good tea.

I assume you may have thought they are the same product cooked differently. Some people don’t even know that two different products originate from different cuisines.

Well, you are right and wrong at the same time. While some others want to know the difference between biscotti and Mandel bread?

Biscotti and Mandel bread is solid and crusty cookies with the same ingredients but in some different quantities.

Today, I will explain everything about Mandel bread vs. biscotti, from the origin to the texture and taste.

The first difference between Mandel bread vs. biscotti is their origin. Those two products come from different cultures and gastronomes.

Biscotti is a cookie that originated in Italy during the Roman Epoque. Initially, they were created as a need for a long shelf life product to survive the time.

In Italy today, the region known for biscotti is Tuscany. In this region, the city of Patio is known for the most authentic producers and recipes.

Mandel bread or mandelbrot is a recipe coming from Jewish cuisine. Although due to Jewish people emigrating to different countries, you can find it again in Italy or Ukraine.

The most crucial difference between biscotti vs. Mandel bread is in their texture. If you have a quick look, they look pretty similar but keep reading 🙂

In Mandel bread, the quantity of oil is more extensive, as you need to put almost double the oil content while all other ingredient quantities stay unchanged.

This only difference in the ingredients creates a significant difference as oil affects texture and moisture.

In both recipes, second baking happens to create a crunchy texture which will affect the shelf life of Mandel bread and biscotti.

Do you remember the difference in oil content and how it affects moisture? The idea is simple, the higher the humidity, the softer the final product.

This is the most significant difference between Mandel bread vs. biscotti.

That’s why Mandela bread is easier to chew and swallow. You will need to chew less time than biscotti until it gets smothered in your mouth.

On the other hand, you might need to dip the biscotti in milk or coffee to help yourself, as this cookie is much stronger due to the small amount of moisture.

As the translation from German of the name Mandelbrot which means almond bread, this recipe has a good quantity of almonds.

So the taste varies by the personal adjustment of the recipe. For example, although the classic recipes have almonds, a strong almond taste mixed with the sweetness is sensed if this is the case.

Answer: Yes, it can. Mandel bread can be frozen for up to three months. You can freeze the bread in a Ziploc bag or airtight container. Make sure that there is no moisture and that the seal of your container is tight before freezing it.

Answer: You can store homemade Biscotti in an airtight container for up to 1 month. For longer storage; you can freeze it for up to 3 months.

Answer: The most common signs of bad homemade biscotti are:

To conclude, although Mandel bread vs. biscotti has a lot in common, some slight differences can be noticed in the texture and taste.

What is known for sure is that those cookies are very popular and likable to be consumed in tea moments, with coffees, or just as snacks.

Both have a mutual advantage; they can be frozen to extend their shelf life. Freezing won’t destroy the taste but can increase the moisture a little on the surface of the cookies.

You can even interchange them with each other in case of need.