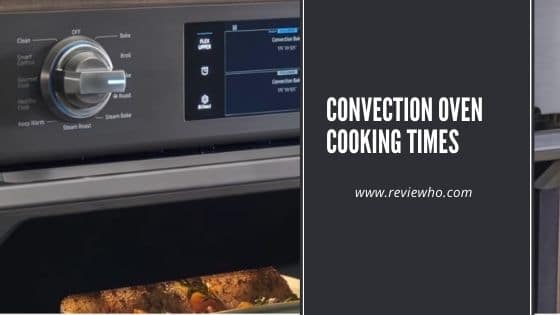 Most of the recipes available are meant for conventional ovens. For that reason, it is important that you make certain adjustments to the temperature and times to avoid burning your food. In this post, we will discuss the convection oven conversion so that you can prepare a perfect meal for your family.

When you cook food in a convection oven, it will cook about 30% faster compared to a conventional oven since the air will be forced to go around the meal. When using this method of cooking, the food will lose less moisture and very few nutrients will be lost during the cooking process.

One major aspect you should consider when choosing the best method of cooking is the pan you will use to cook. In case you will use a cooking tool that will block the circulation of air around the food, it would be pointless to use a convection oven to cook. Convection cooking would be appropriate for shallow pans and cookie sheets. Conventional cooking, on the other hand, would be much better for deep roasting pans, as well as covered pans, dishes, and casseroles.

There are basically three main methods of converting conventional settings to a convection oven setting. However, it would depend on the food you are cooking. The following three are the simple ways you can use without the need for a conversion calculator.

Convection oven time conversion is another method that you can use effectively. When roasting meat, for example, the main idea is to reduce the convection oven roasting times by 25%. However, the temperature has to remain constant. Therefore, if you have a recipe that guides you to cook chicken for one and a half hours at a temperature of 350 degrees Fahrenheit, simply calculate 25% of the time given, and then deduct it from the temperature given. Maintain the temperature.

Reducing both Time and Temperature

For certain recipes, it would be advisable to reduce both temperature and time for the best results. Split the difference between the first and second methods. You should reduce the temperature by 15 to 20 degrees Fahrenheit and reduce the time by 10 to 15%.

This method will work best for potatoes, casseroles, custards, as well as certain baked meals.

It is very important that you consider what the manufacturer tells you to do through the manual. Every oven will be delivered to you with a user guide. You should familiarize yourself with the convection oven you are using before you use it. In case you do not have a guide, you should contact the company. It may be available online.

One of the major strengths of a convection oven is the circulation of hot air. Avoid covering the racks with foil so that the food can be cooked from all sides. You should leave a space of 1 inch around the pan.

If you want perfect browning on your meal, you should use a shallow pan. The cookie sheets should also be rimless. Most of the ovens that are available in the market have racks and pans that will lift roast. The air will, therefore, flow all around the food.

For Poultry and Meats

If you are roasting poultry, you do not need to preheat the oven. Place the meat directly on the rack in the pan for perfect browning. The convection cooking times will be reduced by around 30% if you will not reduce the temperature. You will get certain convection ovens that have a special mode for roasting, which will brown the top and bottom at the same time. You will also find some that provide a heat surge when it starts cooking.

Avoid reducing the temperature at all when you are cooking skinny meat, small meat, or unstuffed poultry.

For Large Meats and Stuffed Turkeys

If you are cooking large meat or a large turkey that is stuffed, you should reduce the temperature by 25 degrees for a certain period or the entire cooking time. The meat will become juicier and it will shrink less when the temperature is lower.

Convection baking times are less than conventional baking times. The main idea of the convection oven will make it easier to cook your meal while enjoying perfect results. You must consider the guidelines above if you want to get perfect results for your recipe. The conversions above will not require any calculator. They are very easy to follow.